El Calafate is a small city named after this pretty yellow plant which has very tasty berries.

Calafate is near the Southern Patagonia Icefield — the 3rd largest glacial region in the world, after Antarctica and Greenland. We started our Patagonia trip by visiting one of its most accessible glaciers – Perito Moreno.

Perito Moreno, named after Argentian explorer and naturalist Francisco Moreno, is about 5km wide, and is located within Parque Nacional Los Glaciares.

We spent several hours watching for icefalls from the glacier. The sound was unbelievable – it seemed as loud or louder than thunder. Here’s a short video of a piece of glacier breaking off (although the video doesn’t really do the rumbling justice).

Afterwards, we hopped on a boat to go trekking on the glacier! It was fun to watch pieces of glaciers floating along the river on the ride there.

With a group of about twenty others, we put on our crampons and the guides led us out on the glacier. It was surreal and stunning.

We walked over crevasses that reached to depths of 60 meters.

There were lots of streams and pools around the glacier, which we got to drink from! The various shades of blue in the water and ice were mind-boggling. Apparently, the compaction of glacial ice causes a crystalline structure that strongly scatters blue light.

We ended the hike with a surprise treat: bourbon, chilled with glacier ice!

The next day, we took a bus to El Chaltén, a small city north of El Calafate. On the way, we were treated to the wide open landscapes of Patagonia.

Patagonia is a (pretty huge) region of land in the southern half of South America, found in both Argentina and Chilé. The name apparently comes from the word Magellan used to describe the people he met living there: patagón, meaning giant, because they were so much taller than the average European at the time. The people he met were problably the Tehuelches. Chaltén is a tehuelche word meaning ‘mountain that sends out smoke’ and refers to the clouds that often form around the mountain’s peak.

Another name for the mountain is Fitzroy, after Darwin’s ship captain on the HMS Beagle.  (Unfortunately, Fitzroy basically kidnapped several of the native Fuegian people during the first Beagle expedition.)  The peak serves as the model for the Patagonia clothing label logo. It’s notoriously difficult to climb because of the shear granite faces and difficult weather, and usually only one successful ascent is made every year.

While in Chaltén, we enjoyed lots of time hiking. We started with a small lookout the first day (~100m climb) and worked our way up to Laguna Torres the second day (~300m climb).

The glacier here (peaking through the hills on the left side of the photo) is called Grand Glacier.

We were surprised that the rating for the Torres hike was medium difficulty because it was overall a very easy hike. So we were a little bit over-confident when we left for our last hike, Laguna de los Tres, because it was rated only slightly more difficult than the previous day’s hike.

And, while a steady climb, most of the hike wasn’t too bad….until we got to the bottom of the final push, which required a solid hour of very steep, constant climbing and rock scrambling. Most of the ~800 m climb was saved for this last part of the hike. 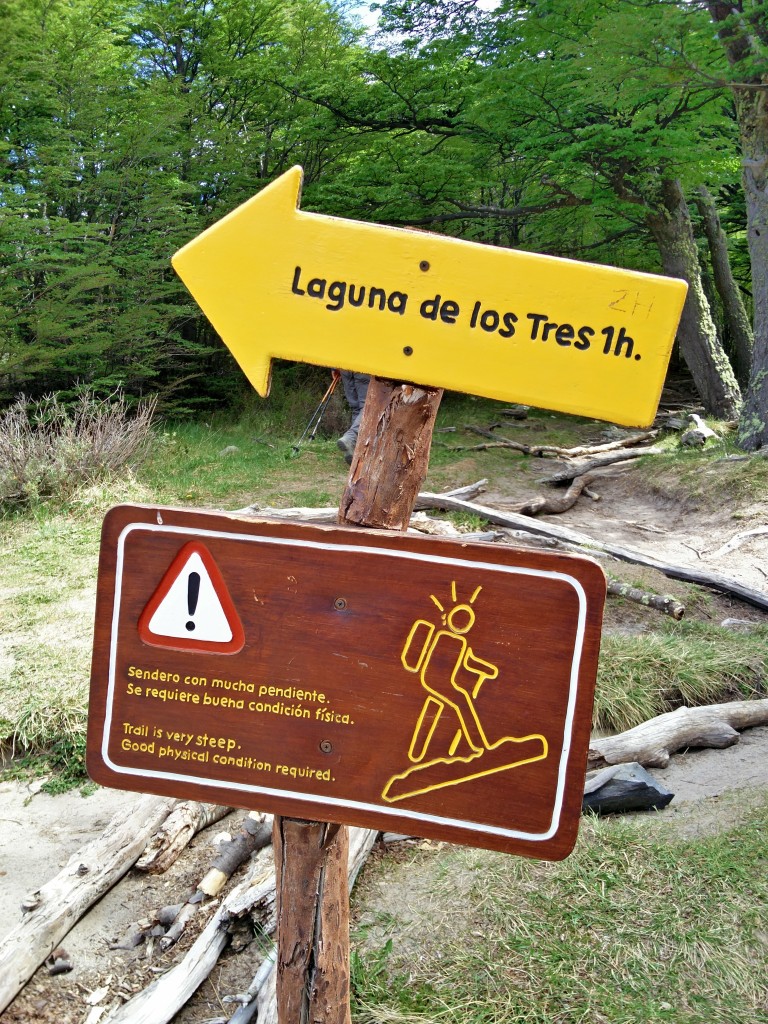 But we finally made it to the top, and to sweeping views of the Piedras Blancas glacier, the frozen Laguna de los Tres, and the distinct peaks of Cerro Chaltén and its neighbors Poincenot and Cerro Torre.

After a quick lunch, we climbed another nearby hill to discover this brilliant turquoise lake which, ironically, is call Laguna Sucia, or Dirty Lake.

We enjoyed a leisurely hike on the way down, exploring the haunting lenga forests

We were starving and grateful to get back into town after the long hike.  We shared delicious cordero patagónico (Patagonian lamb) with calafate berry sauce. Legend has it that whoever eats calafate berries will return to Patagonia, and we certainly hope we will be able to come back to this beautiful place someday!